How Much Is Kitsap Growing? 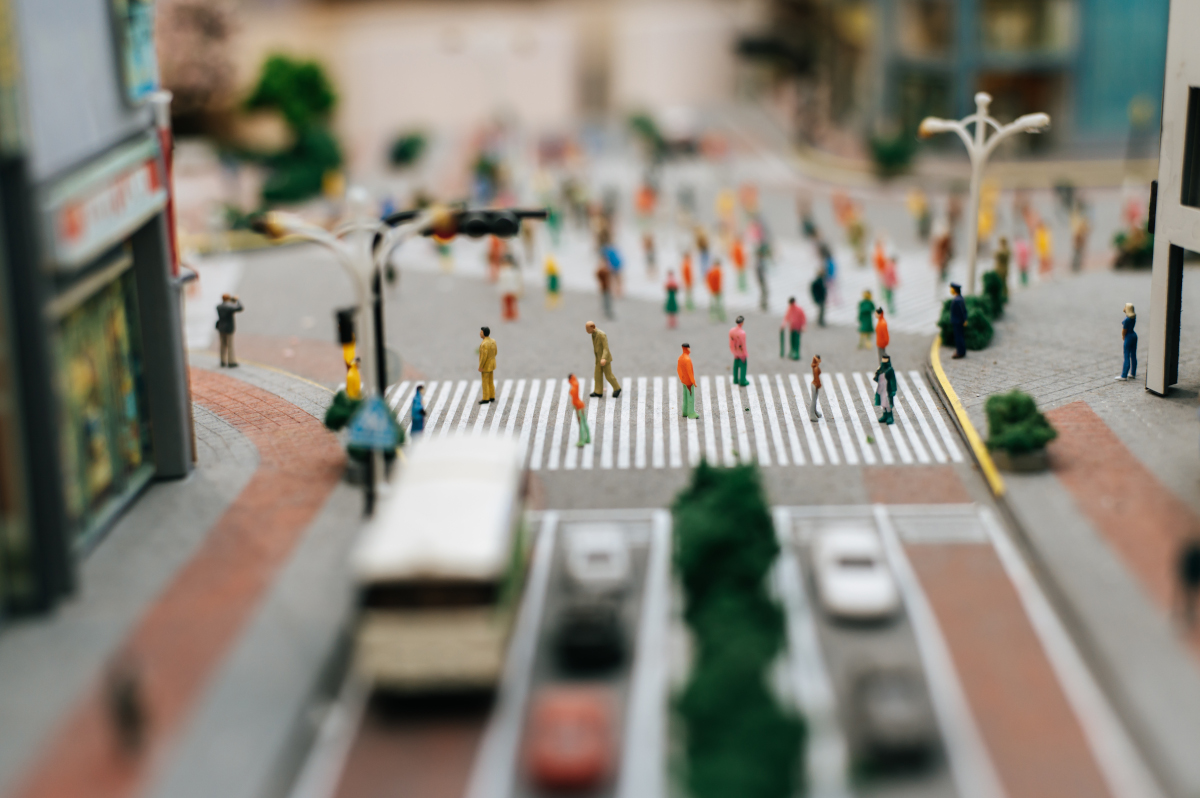 Whether you're already living in Kitsap and looking for a local real estate change, or are someone thinking of moving here, you may wonder exactly how many neighbors you have.  It's especially on everyone's mind in a Census year like this one - and more so, when we wonder if current events surrounding COVID-19 will ultimately impact our Kitsap population.  We've thankfully been largely spared the impact seen in more urban areas, despite our proximity to an outbreak hotspot - which means any population shift will be due to economic factors forcing people away, or desirability factors attracting people (that is to say, not DIRECTLY caused by the pandemic itself.)

This very question led us to look back at population in Kitsap county for the last century or so.  We've had a really interesting history, including very early settlement by Native American tribes, farming expansion in the 1800's and early 1900's, followed by serious industrial expansion with the arrival of the shipyard and especially its military support of the world wars.  Lately, many locals attribute continued growth in the area to both a strong ongoing local military presence, and an attractive cost of living compared to life across Puget Sound.  We are all very much looking forward to the numbers from the current census!

We drew up a quick population growth chart, based on the numbers from the US Census pages: 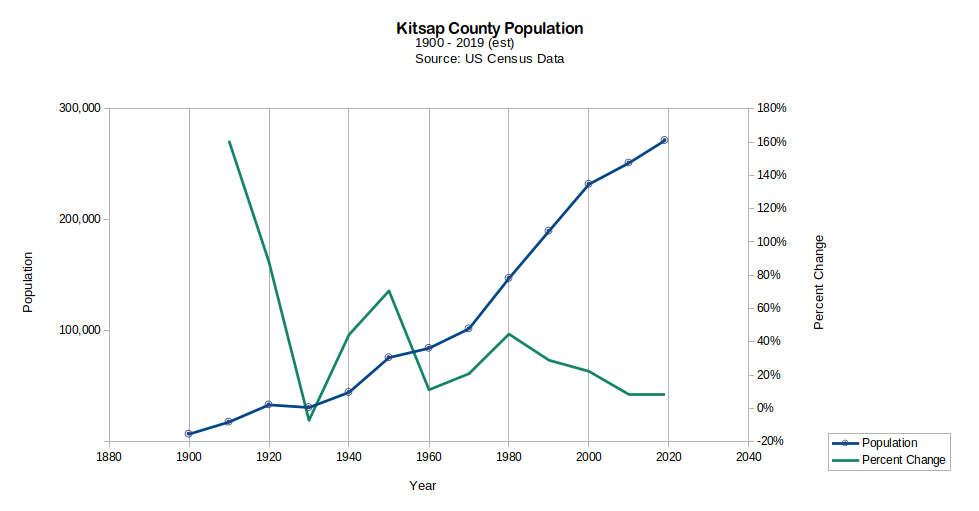 The blue line is fairly self evident - that is the growth of Kitsap county population, from our census records (the last data point is estimated by the census bureau, for 2019.)  The green line, percentage change - the growth rate - is a little harder to read as a line graph, but it's interesting to track alongside the actual population count.  Just remember that anything above 0% is GROWTH, even if the line is trending downward for a given decade: it just means growth was slower one decade, than the last.  The only decade growth declined - was below 0% - was in 1930, when the population fell about 7% compared to 1920.  Percentage changes will be greater when the actual numbers are smaller, so that is why growth was so much more, early on - they were working with very small numbers initially. With the exception of the modest decline nearly 100 years ago, Kitsap has really been all about the growth!  With costs continuing to be astronomical elsewhere, it's almost certain we will continue to see this influx.

You'll notice that the growth rate itself is trending downward slightly.  Remember that just as the growth rate was exaggerated when the population was tiny, this is not an indicator that people are not moving to Kitsap - it just means that as our numbers grow, the apparent rate at which that is happening seems slower overall.  We are, as the blue line indicates, growing pretty steadily.

How does this relate to Kitsap real estate now?  Well, it sure explains our ongoing low inventory!  We have buyers left and right - and if you want to sell, we highly encourage you to go ahead and do what you need to do, in order to get the house listed.  We project that prices are at a peak right now, for those who wish to sell in the near future.  If you haven't caught our recent You Tube videos, do give a few a watch: they cover these sorts of topics and more, and you'll want to have that deeper understand of the local market as you dive in yourself.

If you'd like to talk about Kitsap, or are considering a real estate transaction - give us a ring at Dupuis Team real estate today.  We remain 100% open, and things continue to be quite brisk in local sales!  We look forward to hearing from you soon! 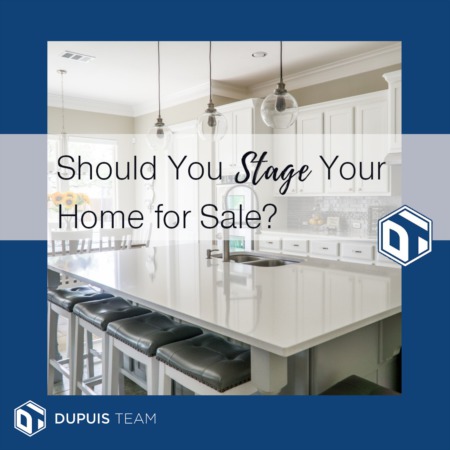 Should You Stage Your Home for Sale?

We get this question ALL the time: should clients stage their homes for sale?  On the face of it, it seems simple:  what's wrong with your ...Read More 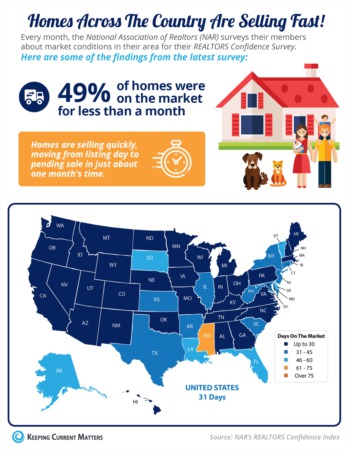 The National Association of REALTORS® surveyed their members for the release of their Confidence Index. The REALTORS® ...Read More 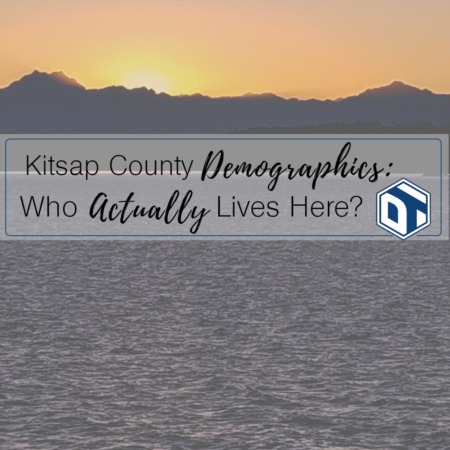 If you are considering relocating to the Kitsap area - or even if you are a long time resident, considering a new home - you may be wondering about ...Read More 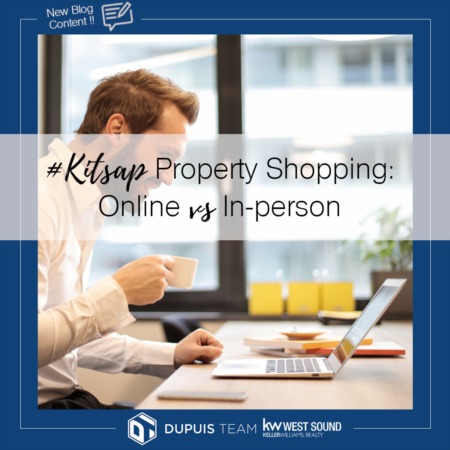 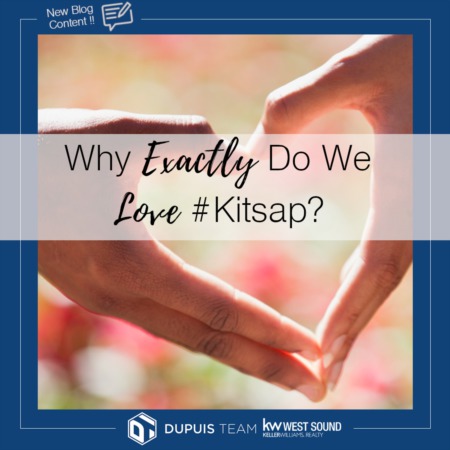 Why exactly do we LOVE #Kitsap?